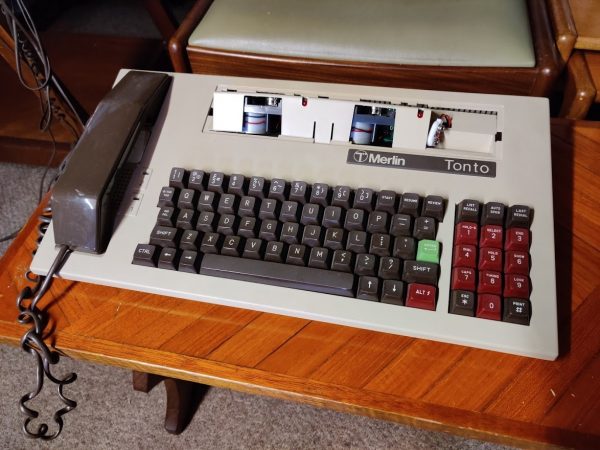 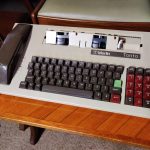 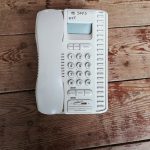 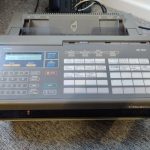 https://www.old-computers.com/museum/computer.asp?c=871
___________
Merlin Tonto The One Per Desk , or OPD , was an innovative hybrid personal computer /telecommunications terminal based on the hardware of the Sinclair QL . The One Per Desk was built by International Computers Limited (ICL) and launched in the UK in 1984. It was the result of a collaborative project between ICL, Sinclair Research and British Telecom begun in 1981, originally intended to incorporate Sinclair’s flat-screen CRT technology. Rebadged versions of the OPD were sold in the United Kingdom as the Merlin Tonto and in Australia as the Telecom Australia Computerphone . Hardware From the QL, the OPD borrowed the 68008 CPU , ZX8301 /8302 ULAs , 128 KB of RAM and dual Microdrives (re-engineered by ICL for greater reliability) but not the 8049 Intelligent Peripheral Controller. Unique to the OPD was a “telephony module” incorporating an Intel 8051 microcontroller (which also controlled the keyboard), two PSTN lines and a V.21 /V.23 modem , plus a built-in telephone handset and a TI TMS5220 speech synthesiser (for automatic answering of incoming calls). [ 1] [2 ] The OPD was supplied with either a 9-inch monochrome (white) monitor or a 14-inch colour monitor. Both monitors also housed the power supply for the OPD itself. Later, 3.5″ floppy disk drives were also available from third-party vendors. Software The system firmware (BFS or “Basic Functional Software”) was unrelated to the QL’s Qdos operating system, although a subset of SuperBASIC was provided on Microdrive cartridge. The BFS provided application-switching, voice/data call management, call answering, phone number directories, viewdata terminal emulation and a simple calculator. The Psion applications suite bundled with the QL was also ported to the OPD as Xchange and was available as an optional ROM pack. Other optional application software available on ROM included various terminal emulators such as Satellite Computing ‘s ICL7561 emulator, plus their Action Diary and Presentation Software, address book, and inter-OPD communications utilities. [2 ] An ICL supplied application was used to synchronise a national bingo game across hundreds of bingo halls in the UK. The integral V.23 dialup modem was used to provide remote communications to the central server. Several UK ICL Mainframe ( Series 39 ) customers, in Local Government and Ministry of Defence sectors, used statistics applications on OPD systems to view graphical representations of mainframe reports. Once again, the integral V.23 modem was used to download from the mainframe. Merlin Tonto British Telecom Business Systems sold the OPD as the Merlin M1800 Tonto [3 ]. BT intended the Tonto to be a centralised desktop information system able to access online services, mainframes and other similar systems through the BT telephone network. It is said [who? ] that the power supply unit was unreliable and often failed on most units. The Tonto retailed at £1,500 at launch. OPD peripherals and software ROM cartridges were also badged under the Merlin brand. BT withdrew support for the Tonto in February 1993. The name Tonto was derived from ” The O utstanding N ew T elecoms O pportunity

___________
The Tonto was the same model as the ICL OPD and the Telcom ComputerPhone which was intended for Australian market. Like the ICL version, the Tonto was sold only in the U.K. It was born thanks to a collaborative venture between British Telecom, ICL and Sinclair Research. The designers idea was to build a centralized desktop information system able to access online services, mainframes and other similar systems through the British Telecom network.

It was essentially a Sinclair QL at heart, featuring the same 68008 processor. Applications software were stored in plug-in ROM cartridges or Microdrive tapes. Sadly, both of them were not compatible with QL interfaces and microdrives format and the specific Tonto O.S. couldn’t run ordinary software made for the QL, even in BASIC language.

However, the most interesting aspect of the Tonto was its telephony integration. Its internal modem (300 an 1200/75 baud) could manage two telephone lines, and the Tonto, could be used as an intelligent answering machine thanks to its synthesised voice response (but no record capabilities), a Prestel terminal for Videotext services as well as a specialized peripheral and multi-protocols terminal for mainframes. Several interconnected Tonto’s also could automatically exchange files and information between them.

Below are prices for the Tonto at is launch, taken from a BT promotional video for the Tonto, dated 29-4-1985.

Then you had an optional printer and many optional ROM packs. This was quite an expensive piece of desk accessory in its day.

Additional information from Ray Axford:
Apart from the black and white screen that came with the standard one, you could also get larger 14″ colour monitor. You could also attach by ribbon cable an additional plug-in double external 3.5″ floppy drive. I used to maintain these for British Telecom and have the technical manual.
I used it for many years, extracting info from Prestel network. Lovely machine – nothing to match even today, with the built in handset on the keyboard. You could also use it hands free, with loudspeaker.

About the “T” logo, Stan Lee specifies:
I recently noticed the rather bizarre T on the Merlin Logo. I knew I recognized it somewhere– Then it hit me. That T is the 2nd half of an old BT logo… that’s probably why there’s a phone attached, I suppose.

Tim Jenner adds:
The Tonto was pretty unreliable – powered up all the time, the PSU’s eventually died. The microdrives were less than perfect too.
You could get expanded rom packs including more memory, but most common was the Exchange rompack which included the Psion Exchange office suite. Quill was excellent!

Bill Perry reports:
These were sold through BT local area sales as well as into bigger projects through BT Field Services. The bigger projects included Customs & Excise at ports and the Home Office Prison Services (HOPS) project. The tape drives were unreliable!